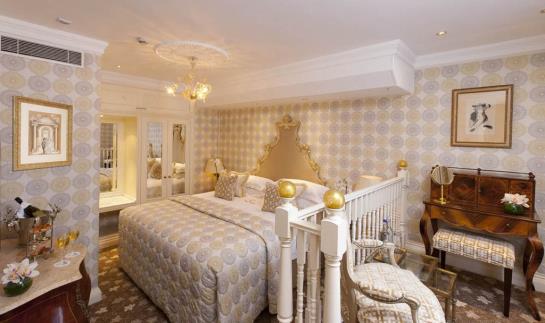 This 4-star luxury hotel is in London's Mayfair, just off Berkeley Square. Oxford Street is half a mile away. The hotel has complimentary Wi-Fi, air-conditioned rooms and an award-winning restaurant. The Chesterfield Mayfair is between Hyde Park and Green Park. Buckingham Palace is half a mile away. Green Park London Underground (subway) Station and the shops of Bond Street are just 320 yards from the hotel. The Chesterfield mixes traditional British charm with modern comforts. The rooms have cable TV, complimentary bottled mineral water and a choice of bed linens and pillows for extra comfort. Guests can choose business-friendly rooms with more desk space, luxury office chairs and business extras. The leisure rooms have more storage space and seating areas. Butler's Restaurant has an AA Rosette award. Traditional Afternoon Tea is served daily and has won the Tea Guild Award of Excellence for the last three years. The Terrace Bar has a large whiskey selection and there is also 24-hour room service.

Hotels near Hotel The Chesterfield Mayfair